Tommy “Bottled it up” & played it with voracity. 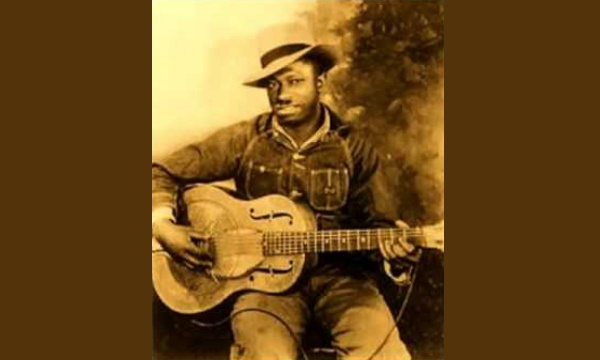 Tommy McClennan’s life, like his music, is elusive, hard to pin down, in between worlds, eras, and styles. Born in the Delta (sources disagree on the exact date and location, but his friend Big Bill Broonzy said that it was Yazoo City, in 1908), Tommy McClennan played Delta-style, acoustic blues with an old-timey, syncopated feel, enlivened by occasional scat singing. That wouldn’t be anything remarkable, but instead of recording it in the South in the late 1920s or early 1930s, McClennan’s 44 sides were laid down in Chicago, between 1939 and 1942. Perhaps the oddest thing about Tommy McClennan’s records is that they sound shockingly modern, in more ways than one. Firstly, there is the sound: instead of the low fidelity, “old sounding” recordings we associate with early blues, especially from the delta, McClennan’s recordings sound present, lively, and full. This is more evident on his vocals than his guitar, suggesting that the quality is more due to McClennan’s vocal delivery than from high-quality microphones. Perhaps more importantly, his performances are characterized by a sly intimacy, a disarming casualness that feels post-modern, more akin to something recorded in the 1990s or later, than to performances from just before World War II. This quality is nowhere more evident than on McClennan’s 1939 recording of “Bottle It Up and Go,” where he laughs his way through the song’s ribald, earthy lyrics, and playfully completes or replaces what would be sung lines entirely with guitar figures, much as Blind Willie Johnson and other notable slide players often did. This track may be the ideal introduction to what makes Tommy McClennan so special, with its joyful scat chorus near the end.  You can hear him smiling on this one, and as per McClennan’s reputation as a heavy drinker, it sounds as if he may have, ah, loosened up a tad before this day’s recording session: http://www.youtube.com/watch?v=9XyNnJNCbV8

The good-time quality on “Bottle It Up and Go” would eventually prove Tommy McClennan’s undoing, however. After 1942, for whatever reasons, he made no more records, by all accounts drinking more and more heavily over time. Bluesman Honeyboy Edwards had known him since the Mississippi days, and was one of his few friends to remain relatively close in McClennan’s later years. Edwards has said that by the late 1950s, Tommy’s drinking had gotten out of hand, and that the last time he saw Tommy McClennan was in May of 1961, when McClennan was homeless, living in a hobo jungle in Chicago. A few days later, Tommy McClennan died of pneumonia.

His music, however, with its raw, visceral quality, lives on through many cover versions. Albert King made Tommy McClennan’s “Cross Cut Saw Blues” into a Chicago staple, while numerous artists, not the least of which was a certain Mr. James Marshall Hendrix of Seattle Washington, have covered “Deep Blue Sea Blues,” often under the name “Catfish Blues. ”  Really, there is very little other blues music like Tommy McClennan’s, and once you’re hooked by his unique charms, check back right here for some more of the greatest American music ever recorded.