The Greatest Blues Guitarist Who Never Played The Blues 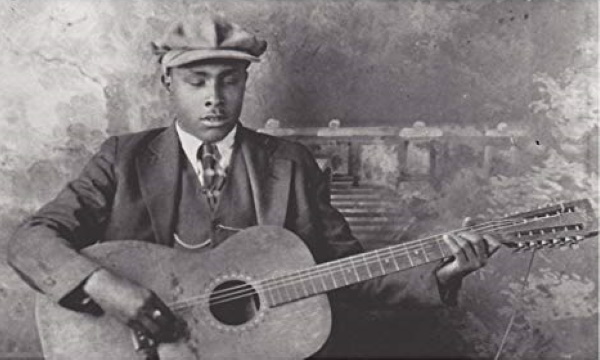 The story of Blind Willie Johnson is compelling on so many levels that it may be best to start with your ears:http://www.youtube.com/watch?v=MH4metotdRk

Blind Willie Johnson’s wordless recording of the old spiritual standard “Dark Was the Night, Cold Was the Ground,” sets a new standard for how much loneliness can be expressed in as single musical performance.

His soul-shattering slide guitar performance, accompanied only by his profoundly felt moans, makes an indelible impression on all who hear it.Blind Willie Johnson’s life is shrouded in mystery. In fact, the photo above is the only one depicting him known to exist.  Born in Brenham, TX, in 1897, Blind Willie Johnson taught himself to play the guitar at a young age.  Stories about how he became blind are contradictory, but his widow Angeline told it this way: Willie’s mother had passed away when he was young, and his father had remarried.

His stepmother was unfaithful, and after Willie’s father confronted her about her infidelity, she assumed that it was young Willie who had informed his father, and blinded him with lye in retaliation, and so that he’d never do that again.

Even before he lost his sight, young Willie had decided to be a preacher.  As a boy and young man, his father would leave him to sing the gospel on street corners in Marlin, TX, while the elder Johnson went to work in the fields.  He developed his singular guitar style and unforgettable vocal delivery this way.  As hard as it may be to believe, there are reports that Blind Lemon Jefferson was simultaneously playing on nearby street corners in Marlin.

The mind boggles at the notion of two giants of the blues playing on the street so near to each other…Blind Willie Johnson may not have played the blues per se, avoiding celebrations of women, liquor, and good times in his lyrics, but he played and sang within the blues idiom, imbuing it with the intensity of the greatest fire-and-brimstone preacher you can imagine.  Although he never, from all reports, played a song that could not be called “sacred,” he wedded the passionate, fervent celebration of the church music he grew up with to a musical idiom born in juke joints and roadhouses.  Blind Willie Johnson bridged the gap between Saturday Night Music, when it was permissible to dance with the devil to the sound of the blues, and Sunday Morning Music, when the devil was rebuked, and sin forgiven, and he did so in an organic, natural way.

In addition to his matchless slide guitar technique, Willie possessed a voice that could cover a range from a gentle-but-textured tenor to a HUGE, gritty shout, to a disarming “false bass” voice that reminds the modern listener of nothing so much as Tuvan throat singing.

If you want an example of Blind Willie Johnson’s astounding vocal technique and range, along with his devastatingly soulful slide guitar technique, give this track a listen:http://www.youtube.com/watch?v=3R7BO6_p4qkEric Clapton has called this track the single greatest slide guitar performance ever captured.

Give it a listen, and if you agree, it’s time to delve deeply into Blind Willie Johnson’s recordings, and then come back here for more about the great blues and gospel/blues artists who helped shape modern music.