A Musical Exodus: The Great Migration of the Blues 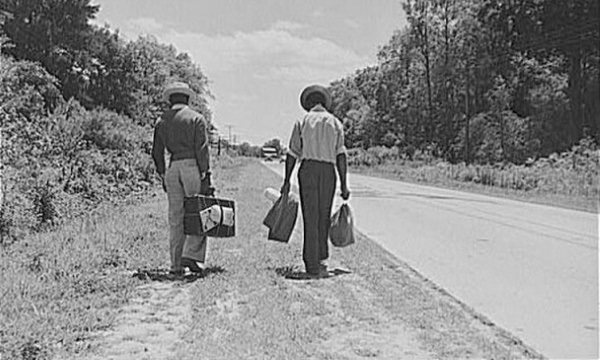 Most music scholars know that the Blues moved from the rural American South into Southern Cities, and then to the great cities farther north up through the center of the continent: St. Louis, Detroit, Chicago. A cursory look at where blues records were made will confirm that, but looking at the phenomenon as the movement of a musical form is somewhat misleading. To truly understand, we must consider, rather, the movement of a people. We must examine an exodus of near-biblical proportions, of a people who brought their music with them, and in the process, urbanized and electrified it: we must examine the role The Great Migration played in the development of the first truly American art form: the Blues.

The Blues, in the South before and during the Depression, was an acoustic affair. Whether it was in the older-Ragtime style, the more countrified Piedmont style that developed from Ragtime, the earthier Delta style, or the minstrel-show-influenced Jug Band style, it was mostly guitar-based, and mostly solo. Yes, there were blues piano players, and Gus Cannon played the banjo with his Jug Stompers, but the Southern rural blues was acoustic guitar music through and through, whether played with a slide or not, open-tuned or not.

Starting around 1910, African Americans began leaving the rural South. Driven by poverty and the lack of jobs, poor educational opportunities for their children, and continuing racial discrimination, segregation, and Jim Crow laws, more than a million black Americans fled the South for the cities of the North: New York, Boston, and Philadelphia all saw a growth in their African American populations between 1910 and 1930, but the greatest growth was in the great Midwestern cities like St. Louis, Cleveland, Detroit, and Chicago.  African Americans formed communities in these cities, but the numbers slowed to almost nothing once the Depression’s effects were felt nationwide. The Great Migration’s first wave ended when jobs up North dried up.

With the end of the Depression and the onset of World War II, a second, far larger wave of African Americans began to look North for opportunities. The Depression had forever changed agriculture in the South, to the extent that even when the economy of the nation as a whole had improved, tenant farming, sharecropping, and cotton production in general would no longer be a viable way to earn a living. This factor, more than anything else, drove part II of The Great Migration. African Americans filled the Northern cities in greater numbers, and small enclaves grew into large neighborhoods and major districts. And with the increased population and the solidification of black communities, the traditions and art forms that had been brought with the “immigrants” were given the chance to resurge, to flourish and develop.

With that development came change. Northern urban clubs were bigger and louder than their counterparts down South, and called for more volume. Luckily, the guitar industry had, since the 1930s, largely perfected the electric guitar and amplifier, and so during the 1940s, in Chicago and St. Louis especially, the blues became electric. Drums were needed to get dancers moving, and as any musician knows, once you have drums, you need bass.

The electric bass only became viable during the 1950s, but standup basses could be amplified, and were often loud enough on their own. Pianos entered the blues band dynamic, and given the fact that the blues artist now had sidemen to fill out his sound, specialists entered the scene: harmonica players, horn players, and even percussionists.The typical lineup of, say, Muddy Waters’ band in the 1950s gives an idea of the classic, electrified, “Chicago Blues” band setup: drums, bass, piano, one or two guitarists augmenting Muddy’s playing, a harmonica player, and Muddy Himself, on occasional lead guitar. All the guitars are electric, and the bass is likely to be as well, unless Willie Dixon is on the session. In the wake of Little Walter’s success with “electric harmonica,” even the harp player probably has his own amplifier.

Practically speaking, the rural, acoustic blues had run its course by the end of World War II, and it would not be until the nostalgia-driven revivals of the style in the early 1960s that it would return. The Great Migration might have turned the volume up on the blues,  but worry not, those of us keeping the traditional  influences of the pre-war styles alive are still influencing the modern styles of electric blues and rock of today.